We love what we do, so let us love you!
hello world! 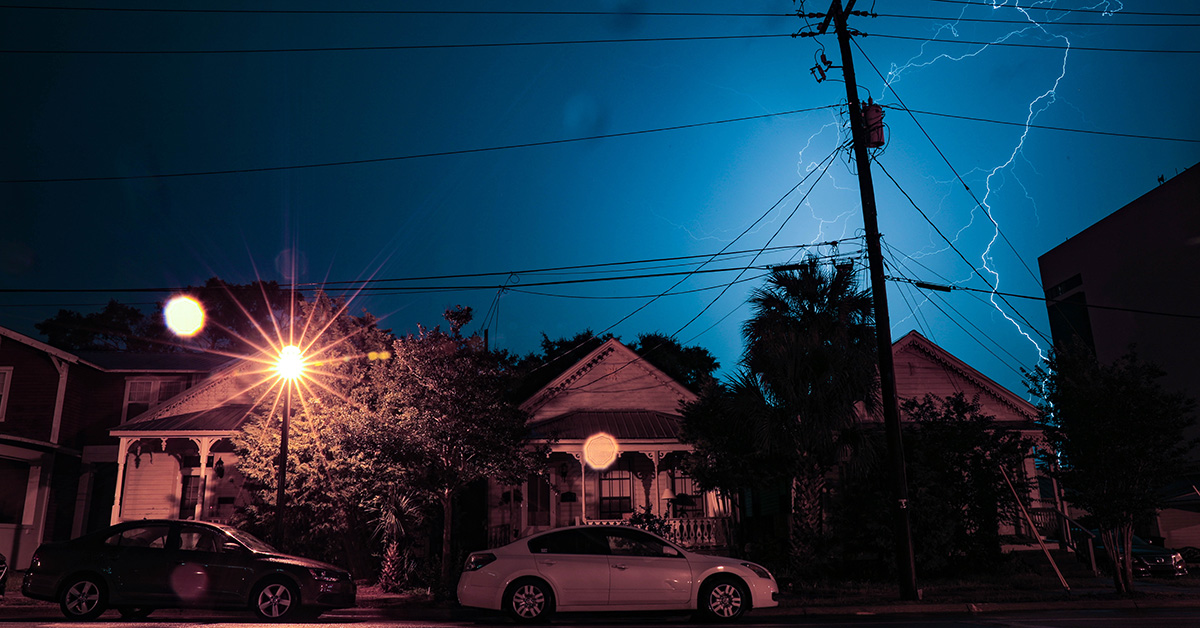 Extreme weather events are difficult to predict, but you can limit the damage. Just recently, in February of 2020, many people were caught off guard by a powerful and fast-moving cell that barrelled in from the north. You can never act too early to protect your property with surge protection devices and electrical grounding, especially as storm season approaches.

How damaging is a lightning strike?

A typical lightning strike carries one billion volts, more than 40,000 times the charge that is delivered through a standard Australian general power outlet. Even a smaller power surge from a storm-felled tree can cause extensive damage.

What can I use for surge protection at home?

There are a few ways to protect from electrical damage. An RCD with RCBO will help prevent electrocution of people and reduce the chance of electrical fires from a loose wire or faulty appliance.

It’s worth noting that RCDs may help prevent electrocution, but may not protect against power surges, such as those from electrical storms.

What is an RCD?

RCD stands for Residual Current Device, which is an earth leakage protection device. These are also sometimes called an RCCB (Residual Current Circuit Breaker). Whatever the acronym, it’s a device that monitors the flow of current and detects any residual electricity that is above ‘normal.’

According to the University of Sydney, an RCD will: “will protect against 99.9% of cases of macro shocks and identify faulty equipment immediately.”

Thanks to its extensive advertising and sports sponsorship, Clipsal is probably the best recognised RCD brand. However, many other manufacturers offer reliable surge protection devices, including ABB, Eaton, Kopp, Legrand and Siemens.

RCBO stands for Residual Current Circuit Breaker with Overcurrent protection. An RCBO is basically the same as an RCD, however it protects 1 individual circuit against overload and short-circuit, for more complete protection of the people and connected equipment.

Is an RCD the same as a Surge Protector?

No. Straight RCDs are typically installed in the power board of a building and monitor the circuits of several outlets or lights at once. Surge protectors are designed to absorb or redirect a power surge to earth, limiting the damaging current from reaching devices.

Check with your electrician or the manufacturer’s product information about what protection is offered or required. Also note that surge protectors may not protect against inconsistent power levels, known as ‘brownouts’.

How many RCDs do I need?

In Australia, two RCDs is the minimum for a standalone home. RCDs have been mandatory on power circuits in Australia since 1991, and on light circuits since 2000. Homeowners are responsible for ensuring that a minimum of two RCDs are installed per domestic installation.

However, with the rise of smart TVs, computers and other high-end electronics, it may be worth discussing with your electrician whether additional circuits and surge protection might be suitable for your situation.

For essential devices, such as computer data storage, security or home medical equipment, you may also want to consider RCBO protected power points. These have the additional benefit of not having to visit the metre-box in the event of a short circuit.

Do I need a surge protector?

Surge protectors are not currently a legal requirement for Australian homes, but they do make a wise investment.

We always recommend unplugging devices when possible before a storm. Even the most powerful surge protectors cannot guarantee to protect computer equipment the billion volts of power of a direct lightning strike. However, commercially installed surge protectors could save your equipment from more common small grid surges.

Surge protectors also have a limited lifespan. Depending on the use and size of the surge they may need replacement after use.

If I have an RCD, do I still need electrical earthing?

An RCD measures the live and neutral wires in your home to detect any imbalance and therefore does not require earthing to do so. However, a reliable earth bonding will give additional protection against fire from loose wires or dead shorts. Some appliances are double insulated and don’t have an earth wire (just two pins on the plug).

Do I need a Line Isolation Monitor?

Line Isolation Monitors are the more expensive alternative to RCDs but rarely used in private homes. They are, however, widely used in operating theatres because they do not disconnect the power when a fault is detected, yet provide safety should a fault exist.

Should I install a lightning rod?

Lightning rods are typically only recommended for very tall homes, or homes have trees taller than the home close to the structure. Talk to your Pascoe’s electrician for a quote.

Will my home and contents insurance cover electrical damage?

If you have home and contents insurance, read the fine print carefully. Some policies have a clause that will not cover electrical damage if the home is not adequately equipped with surge protection. However, reducing your premiums may be up for discussion with adequate lighting and electrical protection.

At Pascoe’s Plumbers and Electricians, our licensed electricians are available 24/7 to undertake the fitting of RCDs, electrical earthing and other surge protection devices to your home. Get in touch with us today, and we will be in touch to confirm our availability!